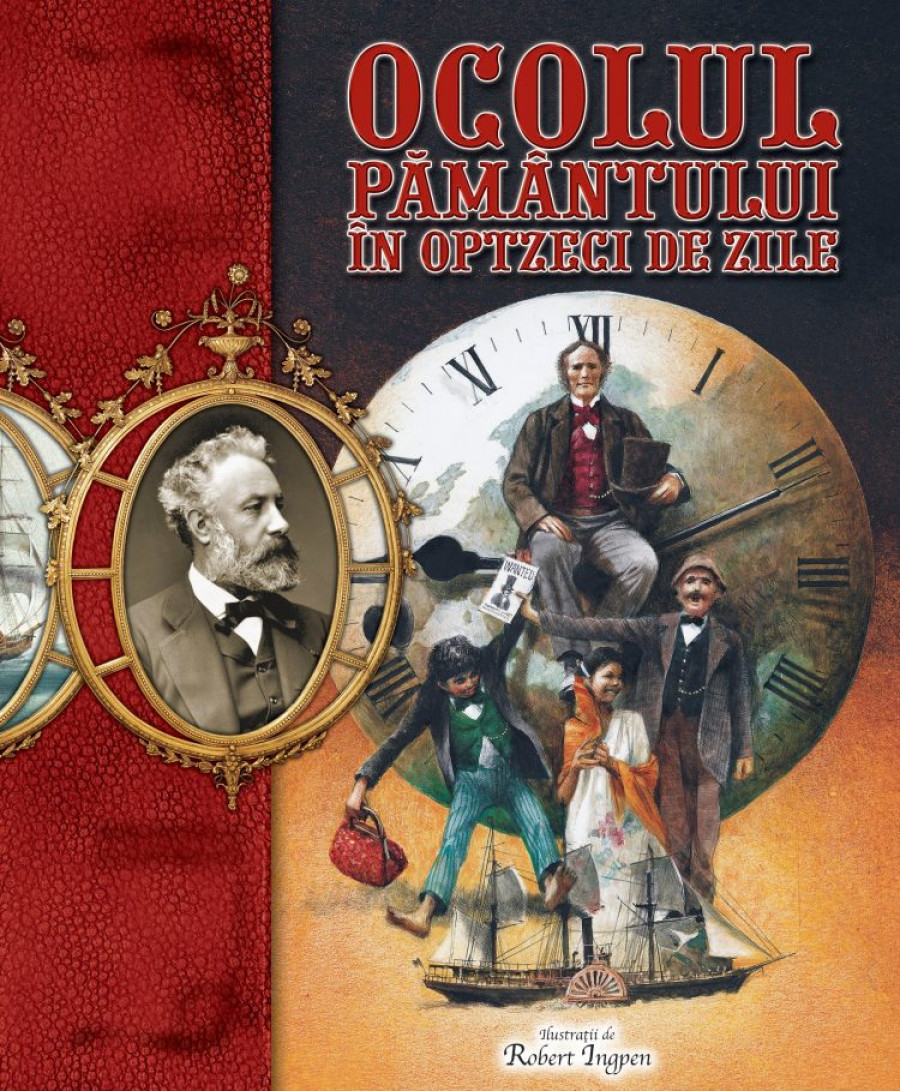 Around the World in Eighty Days

It's a cold, gloomy autumn. The hours of sitting in front of the fireplace get longer and longer. So, I am recommending you to read a classic novel: Around the World in Eighty Days by Jules Verne. It is one of the French writer’s most acclaimed books and among the most popular books in the adventure literature genre (the so called “literature for the youth”).

The novel was first published in 1873 and over the years it has seen many editions, rewritings (as abridged versions for children), adaptations for radiobroadcast plays, comic books and movies. Some of these movies inspired by this book are very well made, and I am thinking especially of the TV miniseries Around the World in Eighty Days, broadcast in 1989, with Pierce Brosnan featuring Phileas Fogg and with the fabulous Sir Peter Ustinov as detective Fix. Moreover, Verne's book has inspired people to actually travel around the world in as many days as the character of the book travelled and following the same route.

Despite the different artistic transpositions the book has seen in time, I strongly and primarily recommend you to read the book as such, and I mean the whole Jules Verne’s novel. The “Litera” Publishing House published it (in 2015) in the collection called “The Library for All Children”. Don’t worry, it’s not just a children's book, but it is one of those books that you read again and again at any age. Interested readers may also find other editions of the novel in Romanian. For example, the “Adevărul Holding” Publishing House published (in 2010) the ”Jules Verne” author series, with Around the World in Eighty Days  being the 20th volume of the series. The “Litera” publishers have also released a colored de luxe edition, with illustrations by Robert Ingpen.

Phileas Fogg, the lead character of the novel, is a typical British gentleman, a man of habits carried out with mathematical precision. He’s so punctual that one can set one’s watch by his actions. One day, at the Reform Club in London, Fogg accepts a wager from his fellow club members that he will be able to travel around the world in exactly 80 days. In the eve of Fogg’s departure on his journey, a robbery happens at the Bank of England, which makes detective Fix suspect that Mr. Fogg is the author of the robbery. So, Fix decides to follow into Fogg’s footsteps on the journey around the world and to catch and arrest him as soon as he gets the chance to do it.

Fogg is accompanied in his journey by his domestic servant and jack-of-all-trades, Passepartout, a Frenchman with a big heart, who is a little absent-minded. At some point during their journey, they meet Aouda, the young widow of dead prince, whom Fogg saves from death, in circumstances that I’ll let you discover in the book. Fogg's journey is a clear demonstration of the old saying “there’s many a slip twixt the cup and the lip”. In other words, the Englishman’s travel plans are often thwarted by circumstances and events that even the most scrupulous planner could not have foreseen. However, Fogg’s determination and ingenuity help him to manage against all odds and to continue his journey to the end.

Obviously, the title of the book tells us from the start that the stubborn Mr. Fogg will prove able to accomplish his plan, but the beauty of the novel lies not in the fact that the reader is made aware early on of the outcome of Fogg’s endeavor, but in the interaction between the very different characters in the book and their adventures which, however dangerous they may be, remain amusing and exciting for the reader all along. Of course, a journey around the world like this takes only a few days today and is undoubtedly less risky than it was back in the nineteenth century. And this is precisely one of the reasons why this novel has been so popular for almost one and a half century: the fact that it takes the readers back in time and through many places (continents) around the world, a world where England was a colonial empire and where nations did not care about “political correctness”,

For those of you who have “tasted” some of Jules Verne's books and know that many of them contain long descriptive passages, full of geographical references and orientation terms, such as latitude and longitude, I would say that Around the World in Eighty Days is, by comparison, much easier to read, richer in dialogues and written in a captivating and sparkling style.

If you like traveling or if you're now on a trip, this book might be a just the perfect literary companion. It’s a book full of typical English humor, even if it was written by a Frenchman. It's a fictitious journey around the world, which will take you no more than two days or so to accomplish.