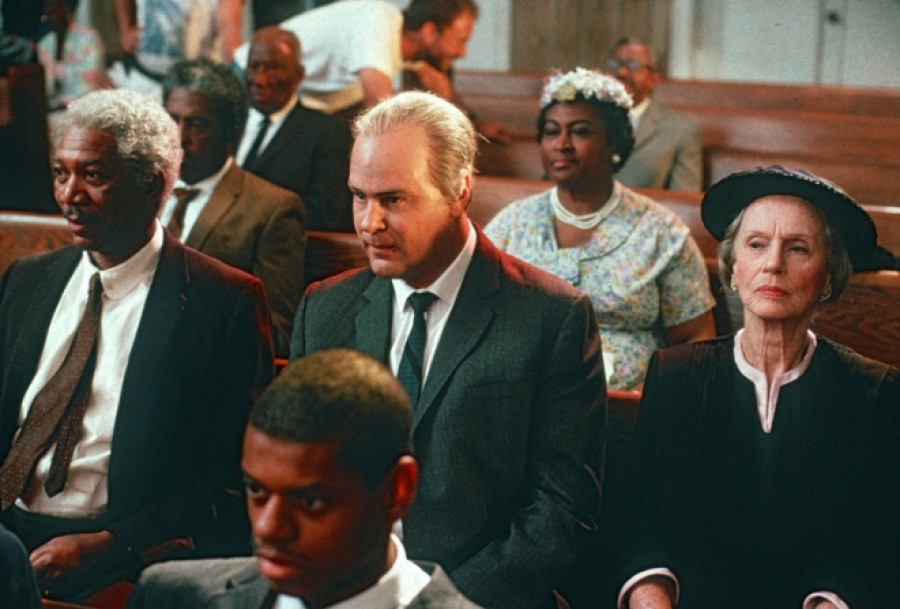 Driving Miss Daisy (1989) is a movie that asks for the viewer's patience. It requires patience because it is a film about patience. Patience to live.

Morgan Freeman is Hoke Colburn, an African-American in his "first old age" committed to being the driver of an older widow of Jew ethnicity, Mrs. Daisy Werthan (masterfully played by Jessica Tandy, 80 years old at the time of filming).

Miss Daisy is not a gaffer, "granny" type, but a person with habits quite rigid in some respects, proud, too self-confident, stubborn as a mule having a rather distant relationship with her daughter. The only person he tolerates around her is Idell, her old maid. That is the case, till one day when due to a small accident she’s had, her son, Boolie (Dan Aykroyd), decides that his mother can no longer drive. Therefore, he hires Hoke against her will.

At first, Miss Daisy does not look too thrilled about the presence of the driver in the privacy of their homes, refusing to call for him, but Hoke has a nosy-polite way of being, managing to persuade the old lady to accept his services. His way of accepting her saying "no", transforming it into a "yes" is very difficult for them in the beginning. Miss Daisy tries to find some blame for him out of anything. She is willing to accuse him that has stolen an ordinary can from the pantry.

During the 99 minutes of the movie, we "sit" together with the main protagonists along no more than quarter of a century of their lives. The film is a character study. Miss Daisy is gradually things about Hoke; for example, he cannot read. Hoke learns how to tackle issues so the he manages to make her open up to him. The friendship that slowly grows between them is not a close one, but one that develops within the relationship "employer and employee". Many years pass by until we catch Hoke and Miss Daisy holding his hand and telling him that he is her best friend. We as viewers might think and ask ourselves: "Doesn’t she mean the only friend?"

Although most of the film, we can see the friendship relations of the two-elderly people, the director builds up a subtle and broader story, yet without departing from the baseline. At the beginning of the film, we are set sometimes towards the mid of the last century, in the south of US with racial issues (prejudice against colored people, but also towards Jews). During a trip, Hoke is asked for ID’s by two white policemen who obviously consider him a suspect because of his color. After Hoke leaves, the policemen remain, watching the car departing and having the image of "a Jew and black guy traveling together" is a pretty "sad" image (for a white America, as one might say). Later, we see Miss Daisy attending a dinner where the guest speaker was Martin Luther King, Jr., whom he admires. However, "big" racial prejudice is only the background story; the main story is the quality of our protagonists’ relationship, which depends primarily on how they are able to manage their own perspectives on life.

After the Idell’s death, we find the two-old people eating in the same house, but at different tables. The two characters draw closer and strengthen their friendship slowly along the years. In other words, it takes time to break down walls and to lift barriers that separate them. Sometimes a trip like this can be quite long.

The film directed by Bruce Beresford is a meditation on something that happens to us all, even those who, at least until a certain age, we feel immortal: i.e. aging. Life is a one-way road and whatever we do, we cannot escape the changes brought by time. Over the years, the body loses its force, the human being loses family members and friends, loneliness shows its “fangs”. Driving Miss Daisy is a reflection on the "autumn" that every soul has under living on this earth. In a sequence, we see photos of Daisy as a child, then in a next sequence, we see Miss Daisy has reached her 90 years old. Beresford suggests that with the years, we as humans, remain loyal to the past, failing to understand the changes around us, new tastes, options our own children have chosen and so on.

Beresford overlooks in an elegant manner the difficult moments of the story. Idell death, for example, is only suggested. Conflicts are sometimes only a glance or tone of voice, and not spoken words.

As we follow the thread of life of the two-elderly people, we ask ourselves, willy-nilly, whether we are able to cope with the challenges of old age, managing to overcome our own prejudices and reach the end of the road, in a beautiful manner.

One notable sequence of the film is that in which we see shots of empty rooms and spaces. It’s Miss Daisy’s home. She has been settled in a retirement home and Boolie intends to sell the house where his mother has spent most of her life. That empty house makes you wonder. The house without Idell, Hoke, and especially without Miss Daisy is an "amnesia" house, without identity. Of course, places and homes remain after people "pass", but without them seem to have lost something of beauty and purpose.

I think, Driving Miss Daisy is director’s Bruce Beresford best film, while benefiting from the famous Hans Zimmer music. The scenario is based on the homonymous play by Alfred Uhry rewarded with a Pulitzer Prize. Moreover, Uhry is the screenwriter.

Although the quality of a film does not depend on the awards earned or their number, I want to mention that Driving Miss Daisy has been awarded four Academy Awards, including three most important: best film, best actress in a leading role and the best screenplay.

The end is simple. It is obvious. It is bright. It is exciting. It is purpose giving way. Despite the fact the time gradually consumes us, we are still left with something: the present is a gift, the mystery of life. Life is, after all, a journey, a unique chance to taste from its kindness. (And what could be wiser than making friends with the driver?)

Driving Miss Daisy is an exquisite film. Viewer’s patience will be richly rewarded.