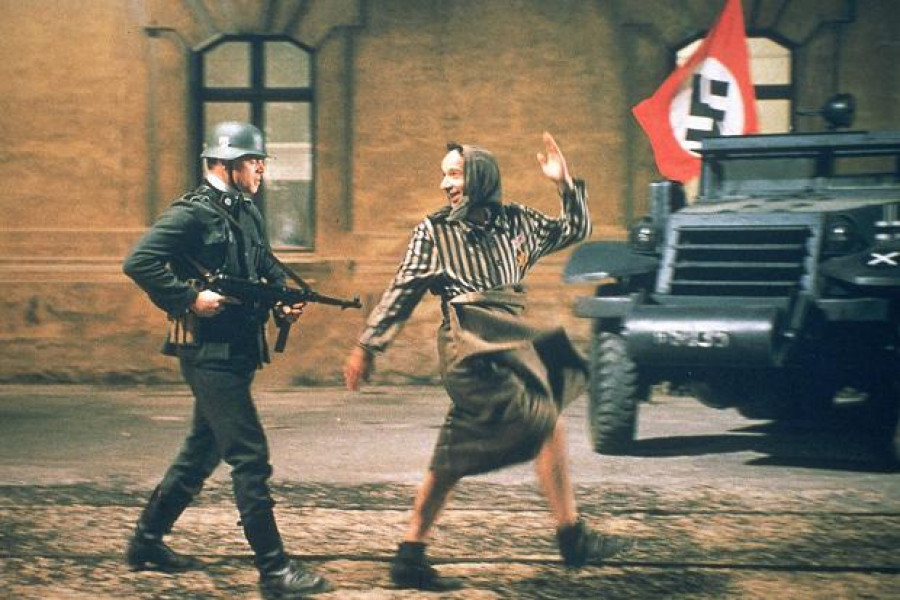 "What it is, in your opinion, the best film ever?" a friend asked me some time ago. "Since I did not see all the films and that, anyway, there are many genres, as well as different tastes regarding cinema, I would say that there is no best film, I replied.”Still, if I were to think of an amazing cinematic experience", I added, "I would say... La vita è bella". The name of Roberto Benigni will remain in the history of the seventh art (especially) for La vita è bella (Life is beautiful), and La vita è bella will remain in the same history as the film that managed to transcribe in comedy form one of the most tragic pages in the history of humanity — the Holocaust. Benigni's approach did not remain without echo in the second half of the 1990s (the film was made in 1997), the idea of ​​a humorous approach to the crimes against humanity committed by the Nazi regime appearing in the eyes of some as monstrous.

It could be said, however, that Benigni's story is not (necessarily) about the Holocaust. The Italian director speaks to the public first of all about life — life which is an obstacle course, with beautiful and sad moments, with laughter and tears and, especially, an opportunity (the only one) to love. Benigni does not relate to the Holocaust and to camp life such as Spielberg in Schindler's List or Polanski in The Pianist. Despite this and the comic approach, La vita è bella remains one of the most beautiful, endearing and sensitive stories (and about the horrors of the extermination camps) ever transposed to the screen.

"This is a simple story… but not an easy one to tell", told Giosue (Guido’s son as an adult and narrator), since the beginning of the film.

La vita è bella is a play in two acts, written, directed and staged by the Italian Benigni who, as the main performer, takes the film on his shoulders. The first act, a romantic comedy set in Arezzo, Italy (1939), introduces on stage Guido, the Jew, an optimistic, bold, inventive, full of verve and endowed with contagious humor waiter, who has a little crush on "principessa" Dora (Nicoletta Braschi), the teacher who will become his wife. It's the really funny part of the film, Guido-Benigni being almost a clown, a figure recalling Chaplin and his famous characters.

One of the best known sequences of the first act is the one in which the Guido, is posing as an important school inspector and teaches the children a lesson about the superiority of the Italian race. "Where can you find someone more handsome than me?... Look at the perfection of this ear. They dream about these in France! Take a look at this belly button! What a knot!” While presenting himself as a pure Aryan race, under the frightened eyes of the school's director, Guido hops from one table to the other and gesticulates continuously much to the students’ delight (and the spectator’s).

The film is sprinkled with the banters of those who have sympathized or supported the doctrine of the higher races. When Guido asks, for example, one of the film’s characters what political sympathies does he share, he turns to his boys and says: "Benito! Adolfo! Stay put!"

The second act will cast the little love story of the two main protagonists in the Helter Skelter of the dramatic events of the Second World War, Guido, Dora and their son, Giosue (Giorgio Cantarini), being deported to a concentration camp. Guido will do everything in his power to keep the innocence of his son intact, making him pass through the horrors of the camp life as through a game whose stake is winning a tank. Humor is not absent neither from this gray side of the story, but, this time, is only associated to the moments when Guido "translates" to his son to the cruel reality of the camp in the form of the rules and stages of a game in which everyone has fun.

One of the most daring scene in the history of cinema dedicated to the Holocaust, is the sequence in which Guido offers to translate the directives and threats of a German officer (though he did not understand German at all) only to keep in the eye of his son the appearance that everything is part of a well-organized game in which everyone in the camp takes part. Inventive to the very end, Guido tries his best so that the little Giosue is not marked for life by the cruelty of the situation.

Of course, one can also find some weak points in the film, but only if you want to analyze it coldly, as a doctoral thesis. The stated aim of the film (announced from the very beginning) is however the one of being regarded as a fable, that is, the recital of fictitious stories as if they were true. If, by reading a random fable, we do not ask ourselves, "Are they or aren’t they, the crab, the frog and the trout real beings?", we should not do this in the case of the La vita è bella as well.

It is true that fiction mingles in this benignant masterpiece with real historical facts, not to distort history, but by doing this it intends to do what any fable does: to satire human misery (the idea of ​​the superior race and all that implied transposition into practice by the Nazis). "Maybe it's only a dream!", whispers Guido to his son who was sleeping in his arms, so that, he can immediately see a mountain of human bodies through the mist. It is perhaps the moment when the horror of the Holocaust shows itself in all its hideousness, a short, but significant moment.

La vita è bella reminds us of The giving tree, the famous children's story written by Shel Silverstein, about the tree who loves a child and it gives him not only fruits, but also branches and its trunk, just to see him happy. Guido is the "tree" that gives himself because he loves. Life is beautiful because by living you can love. In addition, Benigni manages to give us an important lesson — the beauty or ugliness of life is also a matter of perspective.

Certainly, the audience will also notice the film’s gorgeous soundtrack, clear, warm and which also captures the dramatic circumstances surrounding Guido and his son. The music of the film has been also awarded at the 1998 Oscars edition, being the creation of the Italian composer Nicola Piovani, except for the musical bit entitled Barcarolle (or Belle nuit, ô nuit d'amour), from the opera Les contes d'Hoffmann by Jacques Offenbach. As for the sequence in which Guido manages to play at the gramophone this musical sequence in the camp, I'm sure it will remain embedded in your memory forever.

Roberto Benigni received the Oscar for Best Actor in Leading Role (1999), but also the BAFTA Award for Guido’s role, and La vita è bella received the Oscar for Best Foreign Film. But even without the numerous awards received from the US to Cannes and from Spain and the Czech Republic to Australia, this film deserves to be watched over and over again because it permanently reminds us that life is a fragile and precious gift, that has to be used... nicely.