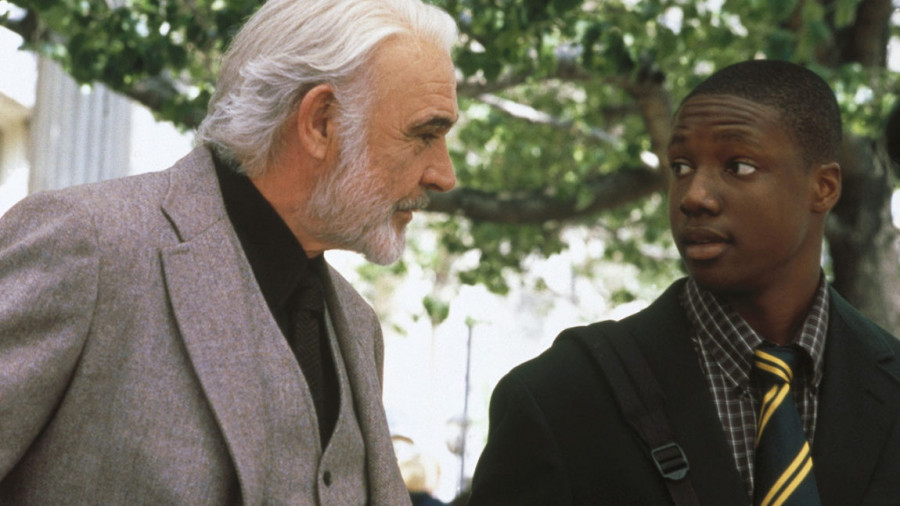 Finding Forrester was one of the last films of Sean Connery, who had been retired for several years. At first glance, it is just a story about a high school student and his mentor, but the film tells more than just a simple story about a kid who needs guidance in life.

I recommend you the film because, as friends of the Respiro Library, you are concerned about books and reading, maybe even writing. Finding Forrester is a story of a boy who loves both reading and writing, and his chance comes from meeting a man who can help him develop his writing talent.

The key figure is a Bronx Afro-American, Jamal Wallace (Rob Brown, in his debut role), a high school student passionate about basketball and, surprisingly (for those around him), reading and writing. His good school grades present him with a proposal from a prestigious private school that needs his skills on the basketball court.

Challenged by the neighborhood buddies, Jamal sneaks into the apartment of a mysterious tenant, nicknamed "Window", just to discover that it is inhabited by a grumpy old man (performed by Connery), William Forrester, who leads a lonely life lost to hundreds of books, among countless bottles. The old man tutors Jamal, helping him refine his writing techniques, but the relationship is a win-win situation, as Forrester himself has his own problems, and Jamal will prove for him the click he needed to return to the world he had been isolated from, long ago.

Gus Van Sant, the director, does not lead the story on a single level or aisle, tracking several leads. First of all, the film is about the friendship having the appearance of a mentorship between Jamal and Forrester. Then about the black student's efforts to fit into a fancy school, with rich colleagues and prejudices taken over, readymade from their parents. Then about Jamal's relationship with his family (mother and brother) and the old gang from the hood. Then about the strained relationship between Jamal and his literature teacher, who suspects him of plagiarism. Then about Forrester's personal problems, who, for years, has been living in his apartment, without communicating with anyone else outside the person doing the shopping for him. It seems that the multitude of doors that the film opens in front of the viewer’s eyes is detrimental to the story. Too many promises that risk remaining unfulfilled...

Some scenes are lightly far-fetched, such as the one in which Jamal has a dispute with his literature teacher, Robert Crawford, the boy recognizing every author from the ones quoted by teacher, and this after hearing only a few quoted words. Impressive, indeed! But fiction! I think it would have been probably more effective for the story to have insisted on the connection between Jamal and Forrester, exploring more the boy's need to express himself in writing, the relation between "reading" and "writing," Forrester's writing secrets, and their origin.

Connery plays a pretty good role (but nowhere near amongst his career’s best), building a character that is on the verge between self-assurance and soul exhaustion. Forrester is actually a supporting character. We discover him through Jamal. Certainly, Connery would have offered more if the script would have offered him more.

The cast is strengthened by talented actors such as the veteran F. Murray Abraham and the young Anna Paquin, however still in supporting roles, not having the possibility to build strong, well-drawn characters, which to be more than the edges of the pool table, of which the main role are the balls to hit.

I'm not hiding you the fact that Finding Forrester is built on quite a few clichés. Part of what you'll see in this film you've seen in other films, so you’ll intuit as you go. Van Sant's work, based on the script written by Mike Rich, is not 100% original. We can easily enlist the film in the category of "motivational films", but without regretting that we have given it a chance.

Finding Forrester shows us that everyone can learn from anyone. It is a necessary lesson for a country where the teacher seems to be an all-knowing who, from the height of the chair, shares science to the small ignorant creatures that are the students. Education could rather be the point of convergence between the teacher as an "advanced student" and the student as "a teacher in the making". Honesty is another lesson on display on the screen in this film, but I think the major emphasis falls on the role of books in our lives, on the fact that reading can open gates not only at the intellectual level, but even as regards to our access to society. The book, we see, is also the road, gate, partner, bridge between people, and destiny.