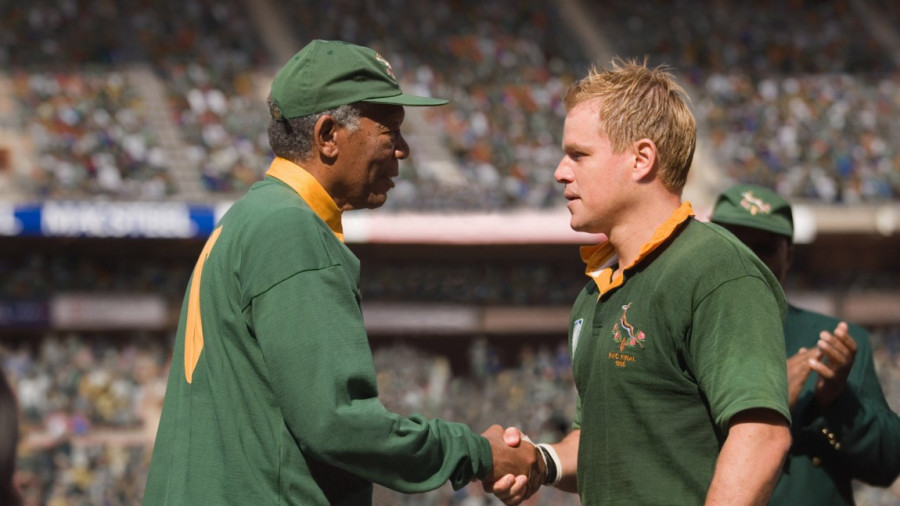 "It matters not how strait the gate, / How charged with punishments the scroll, / I am the master of my fate,/ I am the captain of my soul". William Ernest Henley's lyrics from the poem "Invictus" give voice to the film with the same title, Invictus, a film that is simply inspiring.

Clint Eastwood's appetite, as a director, for biographical films is already known. But if the more recent American Sniper (2014), about the life of an elite sniper Chris Kyle, ended up by being a meagre American-patriotic ode, and in J. Edgar (2011) the director lost along the way the topic — the life of the FBI chief J. Edgar Hoover — in Invictus, Eastwood manages to make a successful collage of several episodes of Nelson Mandela’s life, on the script’s basis of the book Playing the Enemy by John Carlin. It is about the time when the famous anti-apartheid fighter was released from prison and became the first black president of South Africa — the first half of the 1990s.

Undoubtedly, the film’s success also depended on casting Morgan Freeman as Mandela. He is not the only one who performed this role (he joins Danny Glover, Sidney Poitier, Terrence Howard, and many more), but maybe he is the only one who caught that South African president's "thing". Nelson Mandela over time has become more than just a political man — a legendary figure, a symbol of democratic values ​​and fight for freedom. Assuming his role, even if it’s only on screen, is not an easy task. Freeman builds a wise Mandela, aware of the importance of his role, fragile, likeable, friendly, endowed with a subtle sense of humor and respectful of everyone around him. When a newspaper headlines the question: "He may win an election, but can he run a country?", Mandela does not rebuke the journalist, but says: "It's a legitimate question…"

Around Mandela, we see a ton of secondary characters, whose purpose is to highlight the prejudices, fears and, eventually, the hopes of time. Bodyguards, secretaries, cooks, ministers, each with their own perspective on the past and on what needs to be done further. Probably the "white-black" tensions, but also the way they have been defused by Mandela's efforts, are best seen, in the film, in the relations between the people dealing with the security of the president. His attitude towards Afrikaners appears in the eyes of those of the same color with him, almost like a betrayal. Noteworthy is the fact that the difficulties and their solving are treated with a slight dose of humor, the director suggesting thus, perhaps, the ridicule of racial obsessions.

Matt Damon performs Francois Pienaar, the rugby team captain, a young man coming from a white family with racist "twitches", but who, through direct contact with President Mandela, learns the important lesson of equality and mutual respect. When he comes out of his first face to face meeting with the black president, Pienaar admiringly tells his wife: "He’s unlike any person I've ever met". That tells a lot about Mandela's magnetism as well as his ability to demolish barriers, walls.

A curious fact for a cinema-biography, this film is also included in the category of "films inspired by the sports life", its second major topic was the winning of the Rugby World Cup by the South African team, Springbok, in 1995. The team, seen at the time as symbol of white supremacy, is transformed by Mandela's inspiration into a symbol of unity. Contrary to the expectations of the black majority, Mandela does not support the dismantling of the rugby team, but the metamorphosis of it in the opposite of what it had previously represented.

Invictus is a film about overcoming boundaries (in life and in sports), about true leadership and, above all, about the force of forgiveness, its role in the reconciliation process of a racially segregated society, haunted by its past, and with wounds still bleeding. Several moments in the film capture the grudges of the black population against the white oppressors, the whites’ fear that the new president will act against them, and Mandela's (often misunderstood) efforts to help blacks and whites shake hands, leaving the past where it belongs — behind. "Forgiveness liberates the soul. It removes fear. That is why it is such a powerful weapon.", says Mandela through Freeman's wonderful voice. Interesting is that the film is directed by the same Clint Eastwood who, some 17 years before Invictus, made Unforgiven, a film also distributing Morgan Freeman and which explored an opposite concept — revenge.

Eastwood does not forget to include references to the former great African leader’s past, imprisoned for 27 years and subjected to daily work in a stone quarry, so that his gesture of forgiving his "debtors" and encouraging the black population to follow his example can be perceived in all its glory.

The film finale is touching, with the focus moving from Mandela's figure to the rugby finals between Springbok and All Blacks, New Zealand's strong representative. "This country is hungry for greatness.", says the president, and sports becomes the instrument that unites around one common joy the people who have hated each other for decades.

W.E. Henley's "Invictus" poem is President Mandela's courage fountain and, at the same time, the "legacy" he conveys to Pienaar and not only, but also to his team, and to the "46 million children of his" (the South African population). No matter how deep and dark it is the night, it is always followed by a morning. And the great mistakes of history cannot truly be overcome, except through a matching forgiveness.