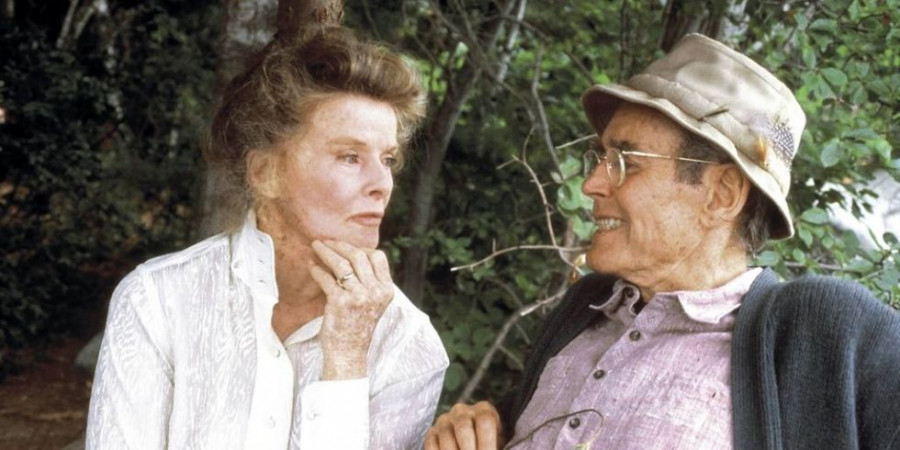 About lily pads and people – On Golden Pond

Without employing “special effects", with a handful of actors and without having much of an intrigue, On Golden Pond is one of the best films I’ve ever seen, a film like a dream, a simple and deep meditation on life, a cinematic poetry about the harmony between man and nature, about basic relations (those between the family) and about the greatest obsession of mankind — the ephemerality of the human being.

The film, made in 1981, has in its main roles (two spouses, Ethel and Norman Thayer Jr.) Katharine Hepburn and Henry Fonda, i.e. two of the longest-running and most respected actors of the twentieth century.

The two elderly spouses have different perspectives on life. Norman is an 80-year-old stubborn retired, with a sharp tongue of which everyone’s afraid of, except for his gentle and energetic wife. More and more weakened, with cardiac problems and frequent gaps in memory (there’s a sequence in which the old man looks at a photo of him and his wife, young, and does not realize who are those in the picture), Norman feels that his end is near, and the thought of dying saddens his days, makes him incapable of enjoying what he still has, in fact it infuriates him, and turns him into a hedgehog with all the spikes bristled. Ethel is the exact opposite. She does not think of death and prefers to enjoy every moment as if eternity was before them. Running through the forest after strawberries, mushrooms or what else was hiding there, smiling, singing, she’s lively as a child.

Obviously, these different perspectives give birth to colorful, funny dialogues between the two spouses. In fact, one of the main strengths of the film is the well-written dialogues, and here is the hand of the screenwriter who is also a play writer. The spectator does not need much to figure out from where the tension comes or, better said, what’s bothering Norman. Nevertheless he joyfully laughs of all those small verbal "clashes" between the old man and those around him.

If Norman is the one who breaks the balance, Ethel has the role of restoring it. She is the peacemaker character who tries to straighten the things up. "Don’t you think that everyone looks back on their childhood with a certain amount of bitterness and regret about something?" she tells her husband. "It doesn’t have to ruin your life, darling."

Fonda and Hepburn, although physically "altered" (at the time of the film release, he was 76 years old —  he died a year later, and she was 74 years old and her head was visibly shaking), manage to bring on the screen a couple who is real, credible, natural. Unmistakably, the fact of being old helped the two actors to send that feeling of nostalgia that you truly feel, only when life is coming to an end with fast-moving steps.

The Thayers return to their Golden Pond home for the summer season and, soon, their daughter, Chelsea (performed by Henry Fonda's daughter Jane Fonda), her boyfriend and his son Billy Ray, join them. The characters' relationships are somewhat tense. Chelsea, apparently, did not have a very good relationship with her father in the past, and now Norman is even fiercer, amid his own fears about death. We do not find out exactly what are the causes of the tense relationship between the old man and his daughter, although the scenario suggests us possible leads — perhaps Norman would have liked a son, or maybe he had too big expectations from his daughter, which she did not manage to fulfill.

Things get complicated at Golden Pond, once Chelsea and her boyfriend decide to temporarily leave, and little Billy, a 13-year-old boy with a rebellious attitude and as willing to pick a fight as is old Norman. And yet the two of them will be able to tie, around the boat and the fishing trips, a beautiful relationship that will help Norman calm down and Billy feel appreciated and wanted.

On Golden Pond does not surprise us through a complicated intrigue. It's not that type of film, it's quite the opposite. However, it has simple images (with lily pads floating on the lake water and immersions that mind their own peaceful existence), a pleasant soundtrack, powerful interpretations and dialogues sprinkled with jokes, but which manage to do more than just amuse the spectator, namely to make him think. And this without leaving the feeling that it would take things very seriously.

Watching the film directed by Mark Rydell, you cannot help but think about the transience of the human being, the fact that time passes for everyone, that even people — just like cars — are gradually becoming jalopies, and what is even sadder, unlike cars, they know this thing.

At the basis of the screenplay was Ernest Thompson's homonymous play (from 1978). Attention, there are two cinematic transpositions of Thompson's play. The second, directed by the playwright himself, was made in 2001, starring Julie Andrews and Christopher Plummer. The film with Hepburn and Fonda was the winner at the 1982 Oscars with three statues: Henry Fonda — best actor in a leading role; Katharine Hepburn — best actress in leading role; Ernest Thompson — best adapted scenario.

I read and reread the commentary that I made to this film and I realize that I have not found the words best suited to convince you that it is a film that deserves attention. I’ll try again:

Seek it! Watch it! I think you will enjoy it.