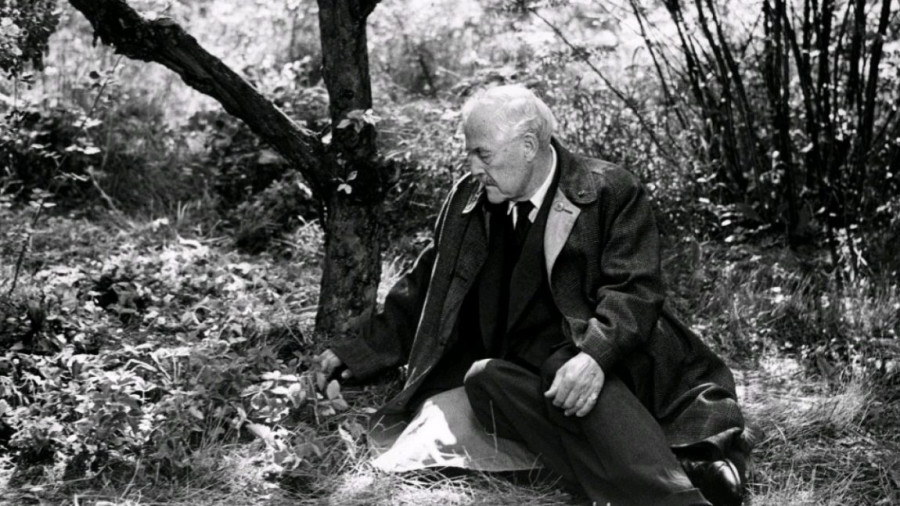 Time digs deep wrinkles on the face and even deeper into the soul. Over the years, nostalgia gets stronger, and the feeling that time is running out haunts every moment. Aging means loneliness and sadness and, above all, regrets. These are the topics of the film Smultronstället (aka Wild Strawberries, 1957), written and directed by Ingmar Bergman.

The main character is Isak Borg (beautifully and subtly played by Victor Sjöström), a doctor aged 76, who is to receive an honorary degree during a special ceremony at Lund University. The night before the event, Isak has a strange dream, that makes him think and confronts him with his own imminent death. It is the most disturbing dream, in which the man finds himself in a place where time stands still, and a bad omen hearse passes slowly through the deserted streets.

Travelling to Lund, accompanied by his daughter-in-law and other characters that join them, becomes for Isak an inner journey, an opportunity to remember the past and the things that he would have done differently in his life. He gradually discovers that a life dedicated to medicine and rewarded with honors by society is not necessarily a happy life.

The discussions Isak has with his daughter-in-law, Marianne (Ingrid Thulin), the presence in the car of three young hikers and the marital quarrels of a couple they meet after an accident are all opportunities for Isak to reflect on his own life, the relationships with his wife and his son, and to remember his first love, which remained unfulfilled. The summary is not encouraging, and Bergman is shrewd to convey the feeling that Isak actually missed what mattered most. The famous doctor realizes that except his work, which is appreciated by a wide audience, all other important parts of life ended in bitter failures. In addition, his failures as a husband and as a father have had a negative impact on the life of his son. Through dreams, memories and meetings, Isak seeks a thread to hold his life together and try to make some things right if possible.

The film has several sequences that simply overwhelm the viewer, forcing him into a state suitable for self-observation. Such a scene is when Isak returns to his childhood home, the house with wild strawberries, reliving the memory of old events, things that he’s maybe tried to forget. Significant to the whole story is the open discussion Marianne has with her father-in-law, in which she expresses her disagreement with the way he relates to his son, making him aware of something he wasn’t previously aware of.

The topic of God, that is essential to every reflection about the meaning of life and the pursuit of happiness, is only vaguely approached, as a dispute between two young men having opposite beliefs - Anders, who wants to become a priest, and Viktor, who wants to become a doctor. Challenged to express an opinion on this topic, Isak doesn’t give in, as if such a debate would rather belong to another age. The old man is no longer concerned about major issues, only about his own ephemeral existence.

Smultronstället is an experience that leaves deep marks in the soul of the viewer, the kind of film that you will always remember; especially one of the last scenes of the film, in which Isak remembers his parents. Although it might be considered a film dedicated to ghosts that accompany old age, Smultronstället is not necessarily a film for the elderly but for everyone, especially for those who are still able to change something and not regret it later. Any viewer can see in Bergman's film at least one shade specific to his own soul, a very familiar something, a door through which one can slip into his own past.

Smultronstället is a cinematographic exercise, a surreal, allegorical, analytical road trip film that speaks to the need to reconcile not only with others, but first of all, with ourselves. Running away from the past is not always the best choice because, at the end of our lives, we might encounter the memories of moments of crisis, whose resolution has been postponed too long. A selfish life can only have an unhappy ending, yet Bergman gives his character a chance for salvation, the opportunity to purify before the last jump.

Smultronstället is an opportunity to open the mind's eye to the past that merges with our own roots, a look in the mirror – of course the skin is wrinkled, but the eyes ... the eyes have more stories to tell and bitter tears to weep.