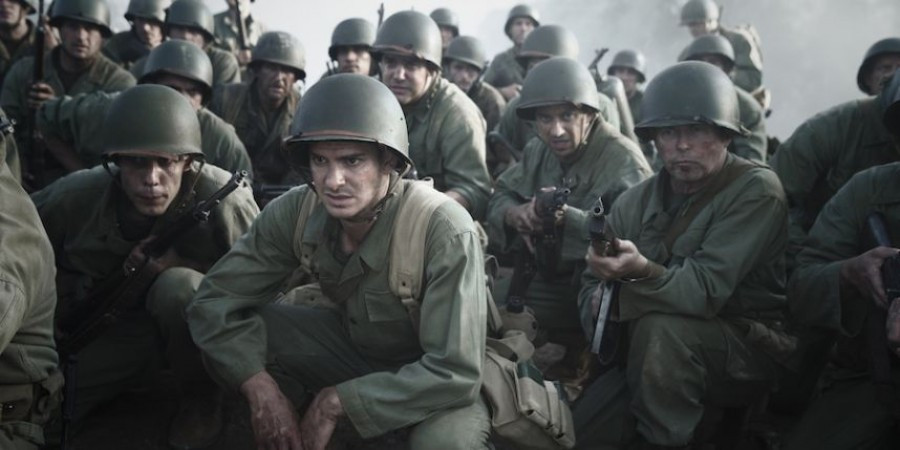 Hacksaw Ridge (2016) is a very interesting movie about war, combined with a motivational message, and a convinced pacifist as main character. The story is based on real events (at the end, the audience can see some documentary sequences recorded with the real Desmond Doss), which offers a sense of authenticity when presenting such a Christian subject to the big public.

Who was Desmond Doss?

An American young man who wanted to take part in the fight between his country and the Japanese, during the Second World War, but who didn’t want to kill anyone. In fact, he didn’t even want to hold of a weapon, as he was motivated by his religious beliefs (he was a member of the Seventh Adventist Church) and the Bible commandment of the Decalogue – “Thou shall not kill”. Even though he was mocked by his superiors, beaten up by the battalion comrades, and eventually presented to the Martial Court, Desmond tries to heal the world that seems to be disintegrating before his eyes. He is motivated by good and care, and he saves the lives of those injured on the field.

Mel Gibson (who directed another religious film, The Passion of the Christ, in 2004) returns to the director's seat after a decade, committing wholeheartedly to depicting young Desmond's religious preoccupations. He goes to church, reads the Bible, declares his Christian values and religious principles in front of everyone, and will not sacrifice his faith. We see flashbacks from Desmond's childhood: he grew up in a less than happy family, where the father, a World War I veteran, took out his PTSD on his wife and two boys. In a flashback scene, Desmond almost kills his brother after a violent conflict, and afterwards, scared by what he’d almost done, stares at a picture of Cain, the biblical character who killed his brother, Abel - a symbolic mirroring.

However, the viewer doesn’t learn much about how Desmond embraced Christianity. The focus of the movie is on the way faith influenced the young hero's participation in the dramatic events of 1945.

Hacksaw Ridge is a film divided in two. The first part, the prelude, seeks to establish the love relationship between Desmond and the young nurse who becomes his wife, Dorothy Schutte (Teresa Palmer). This is more reminiscent of the romance genre and, perhaps, the reason why the contrast between the two parts is too strong. Gibson, known for his predilection for high-profile action films (Braveheart, Apocalypto), portrays realistic scenes of war - the battlefield is full of corpses, limbs, crushed heads and rats eating from the abandoned bodies of the dead. Fair warning to those who might think this is a family-friendly Christian-themed movie! In fact, Hacksaw Ridge is rated R.

Unlike his father, Tom Doss, who witnessed the horrors of the world's first war, Desmond manages to maintain his spiritual balance despite the similar atrocities. This is only because of his faith, because of the Bible he carries with him even to the frontlines.

For Andrew Garfield, who plays Desmond, the role is a sudden transition from teen-themed movies (the two “The Amazing Spider-Man”) to a more profound, character-based genre. His character is conflicted between the desire to serve his homeland and the need to remain faithful to his own principles. In fact, Garfield stars in two Christian films almost simultaneously: besides the role of Adventist Desmond Doss, he also has the lead role in “Silence” (directed by Martin Scorsese), where he plays the missionary priest Sebastião Rodrigues, persecuted because of his activity in Japan, in the 17th century. The film is the adaptation of a famous novel by Shusaku Endo.

The cast in Hacksaw Ridge is completed by Vince Vaughn, Sam Worthington and Hugo Weaving.

In conclusion, war becomes even more absurd and ridiculous when, among the bullets and dead bodies, a man runs to save lives by himself (even those of the Japanese enemies).

Hacksaw Ridge deals with the value and importance of Christian principles, and does that in front of a world that is increasingly disregarding them, accusing churches and their leaders of hypocrisy. The story of Desmond Doss is the simple and clear proof that an honest Christian can make the world a better place solely by giving heroism a different meaning than the traditional one.