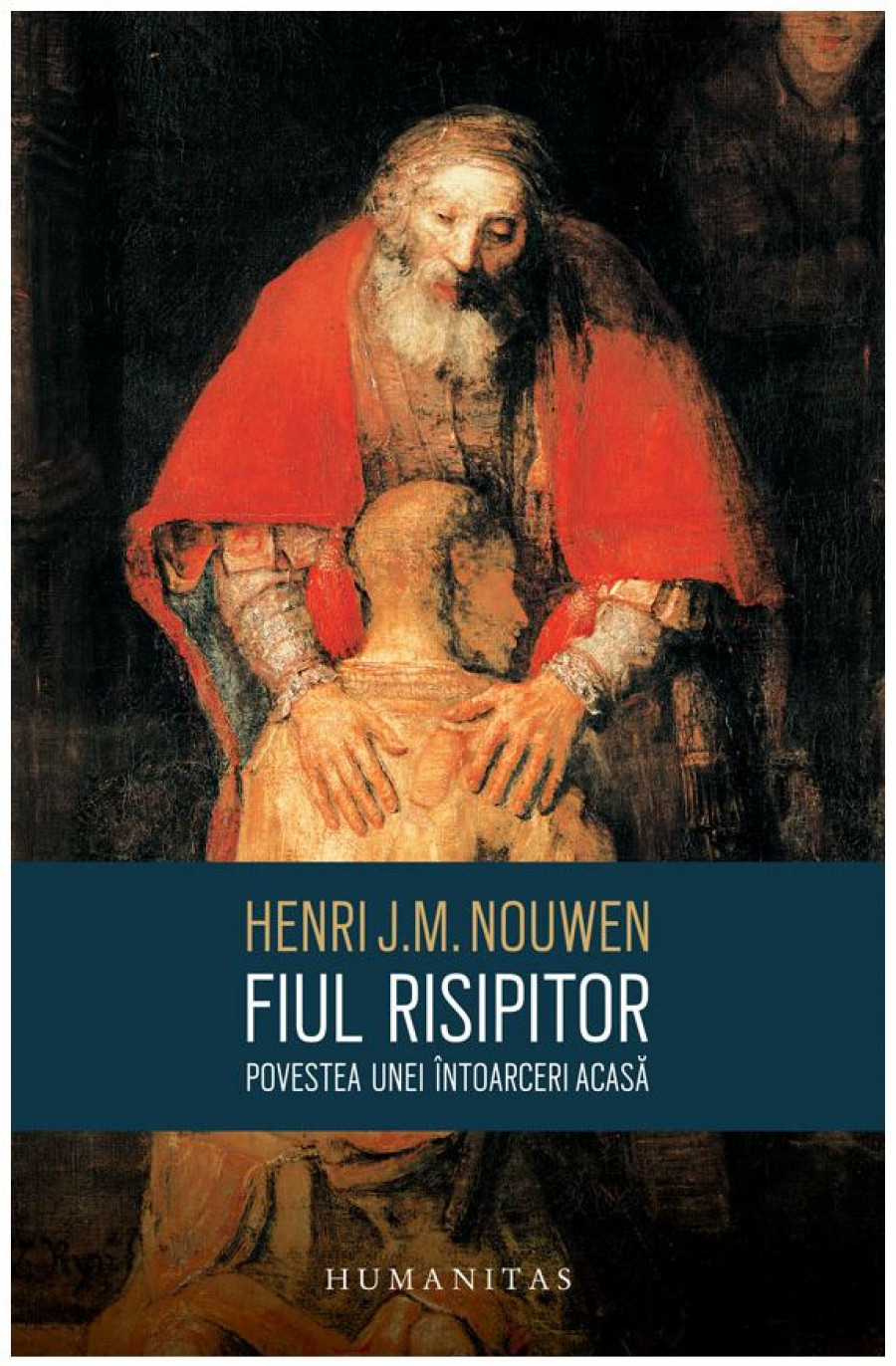 The Return of the Prodigal Son: A story of Homecoming

I discovered Henri J.M. Nouwen - or, better said, I was helped to discover him - when I was an undergraduate and one of our teachers told us about Nouwen’s writings, describing them as brief, yet deep insights into the Christian spirituality. It is therefore a joy for me now to be able to recommend to the Romanian readers Nouwen’s book The Return of the Prodigal Son: A story of Homecoming, recently published in Romania.

The prodigal son's parable is a well-known biblical text, but Nouwen surprises us with his new interpretation key, which he found when looking at a famous painting by Rembrandt, The Return of the Prodigal Son, dating from 1668-1669, at Hermitage Museum in St. Petersburg. The exploration of the depths of the abovementioned biblical text is based in Nouwen’s book on two pillars: Rembrandt’s painting and the spiritual experience of the author himself. We are not, therefore, in the face of a rigorous biblical or theological review, but in the face of a lesson of life, mediated by the spiritual discipline of a wanderer on his way home.

I do not think that the profound meanings of Nouwen's work can be easily understood by readers without first learning, at least in brief, some things about the author’s life, as his books are stemming from his own life experience and from his personal preoccupations and struggles.

The Dutchman Henri J.M. Nouwen (1932-1996) was a Catholic priest and the author of not less than 39 books (Romanian readers are perhaps familiar with one of them, called Bread for the Journey: A Daybook of Wisdom and Faith, published by Gutenberg Galaxy, in 2014, translated in Romanian by Abel Dragomir). Nouwen taught at the universities of Notre Dame, Yale and Harvard, in the US, but he withdrew from academic life to spend the last years of his life in a Canadian community that looked after people with severe mental and physical disabilities. As the professor who recommended us Nouwen’s books used to say, there must be something extraordinary about a man who gives up a Harvard chair to go look after mentally disturbed people; something that transcends the ordinary, the human nature, the  pleasures of life and the human ego. The spiritual experience of such a man can only stir our utmost admiration.

Nouwen illustrates his reflections by recounting short episodes of his own life, associating his spiritual anxieties, his life stages and his ups and downs to the characters and the events in the prodigal son's parable. This way, the parable comes to life and acquires meaning and relevance for the today’s reader. We come to see how the story told by Jesus two millennia ago deciphers our own attitudes to human existence, challenging us to discover our own self and to return home where our Father waits for us.

A chance encounter with a reproduction of Rembrandt's painting The Return of the Prodigal Son, in 1983, catapulted Henri Nouwen into a long spiritual adventure that was to last to the end of his life: “In a way, I felt that the painting would enable me to penetrate into the mystery of homecoming in ways I’d never done before” (p. 13). The interest in Rembrandt’s painting The Return of the Prodigal Son, which is among Rembrandt’s final works, took Nouwen to the Soviet Union, where he could admire the work of the Dutch painter at the Hermitage Museum, becoming fully captivated by it.

We have to say that, besides his own life experience, the author often refers to the life of Rembrandt Harmensz van Rijn, who lived a terribly tumultuous life, experiencing first hand the sweetness of success and the bitterness of decline. Nouwen sees in the famous painting about the return of the prodigal son the expression of the end of the painter’s own painful journey through life (Rembrandt was old when he painted this painting, surviving the death of his wives and children). In other words, Rembrandt and Nouwen and we, the readers, we all find a narrow gateway in this parable, behind which we find God and the Peace that  He and only He can offer us.

The details of the painting provide the author with brief revelations about the interpretation of the biblical text and helps him discover meanings that are relevant to his life and, why not, to the life of the readers. Although the biblical text does not place the two rebellious sons in the same scene, Rembrandt paints the older son as a witness of the scene of the homecoming of the younger son, thereby enhancing the dramatic thrill of the Biblical episode. Also interesting is Nouwen's comment regarding the way Rembrandt painted the hands of the father, which seem to suggest the mothering and the fathering at the same time: the left hand appears larger and more masculine, set on the son's shoulder, while the right hand looks softer and more feminine in gesture. And these are only a few of Nouwen’s charming comment on this parable.

The cover of this book, published by the Humanitas Publishing House, does not illustrate the whole painting by Rembrandt, but only the scene where the father is embracing the son who returns home, probably because the publisher wanted to highlight what Nouwen himself considered to be the spiritual focus of the painting, despite the fact that, in reality, the scene is not in the center of the painting.

The structure of the book is simple and easy to follow. It includes three major parts: The Prodigal Son, The Older Son and The Father. Nouwen finds himself in each of the three hypostases; firstly, as the prodigal son who returns to the Father, secondly, as the older son, tormented by feelings of rebellion and resentment, despite the fact that he lives in his Father's house, and thirdly as the Father himself, coming out of the stage of a son and turning into a spiritual parent. This last stage of spiritual development is the stage of maturity. It is the stage where the Christian no longer demands, no longer requests, but starts offering – offering his own self.

The book The Return of the Prodigal Son: A Story of Homecoming is not an exegesis of the prodigal son's parable as recounted by Jesus Christ and contained in the book of Luke the Evangelist (chapter 15), but rather an applied comment, a door to the reader's understanding of the fact that God calls on him to abandon his/her fears, to leave behind the vanities of the world, to return home and to gradually take over his responsibilities.

The book was translated from English into Romanian by Monica Broşteanu, a university lecturer at the University of Bucharest, who also translated the biblical texts that Nouwen cited in his book. We find that the book was first translated in Romanian some 18 years ago. I haven’t read the old version, but I can tell you for sure, as a reader, that the current translation is excellent.

I warmly recommend this book that turns our minds to an immortal biblical text and our hearts to our Father.