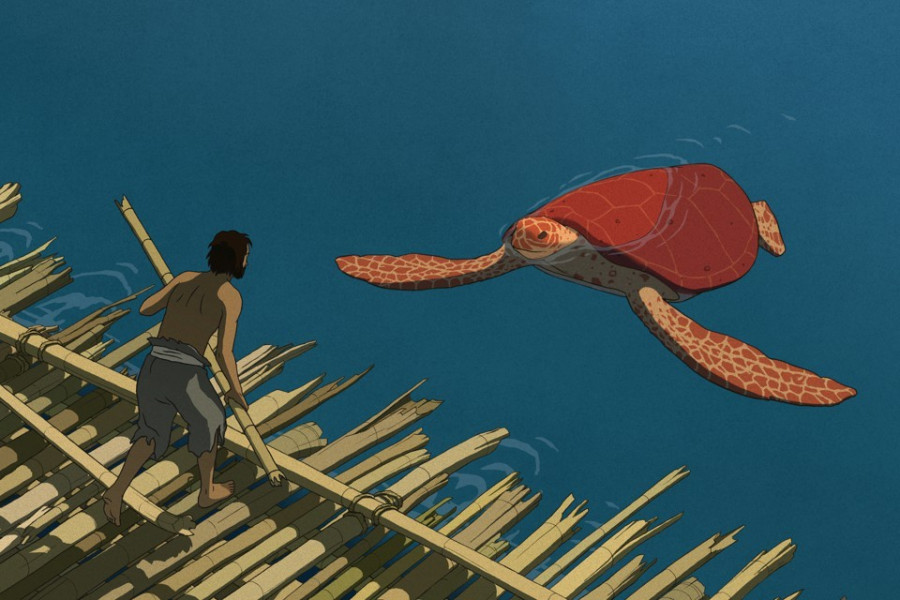 Adam and Eve on a deserted island. La Tortue Rouge

La Tortue Rouge is one of the most beautiful cartoons of recent years and a serious candidate for the list of the best cartoons of all time... of animation.

A story of a Robinson Crusoe, this might be said about La Tortue Rouge, at least in the first few minutes of the film. In reality, the animation is not about an explorer who has to survive under fierce and wild conditions, but a meditation about the meaning of human existence, the life cycles, and the intrinsic need of a man to have the right help, a person with whom he shares the good and bad.

The main character (whose name we don’t know) is a young man stranded on an island. As soon as he wakes up, he explores the island, finding it deserted, populated by small creatures. The man begins to gather bamboo sticks and rigs a raft with which he sails off to the ocean, towards his world. It does not go too far. Something – he does not know what and neither do we – shatters his raft, forcing him to return to the island.

After several failed attempts of “escape”, the man discovers that a red turtle was the one who was sabotaging him. The red turtle shows itself to him one day on the beach and, magically, turns into a young woman who stays with him. Here, the story goes from the "grounds" of the real to those of the fantastic. The "storyteller" does not reveal to us if the red turtle metamorphosed in a woman is just a delusion in the mind of the man (thing that might’ve been suggested at the end of the film) or whether it really happened (and how). This remains a mystery until the end.

The two approach each other, form a couple, and the years bring them a little boy whom they raise in the natural, exotic setting of the island. One day, the father explains to the little boy that, somewhere, far away, there are other people like them. The child grows up and, as an adult, sails off at sea looking for his own destiny.

La Tortue Rouge is not a children's animation film, neither a commercial production. In fact, it should be specified that the film does not even have dialogues. It is a silent film, accompanied by a pleasant soundtrack, bearing the signature of Laurent Perez del Mar. It is true that, from time to time, the characters shout or laugh, but that's pretty much to what the "dialogue" of the film comes down to. It may seem a bit strange, unattractive, but I assure you that the movie deserves all the attention.

The island is a miniature projection of the world. What the anonymous characters live there is in fact the human life as it is lived in any other corner of the world. First, people are young and want to venture off at sea, to the distant horizon. Then, they meet a person with whom they share their days, then children are born, and the desire to go to distant shores is quenched. Time runs out on its natural course, bringing onto them visible signs of aging. Time passing and the evolution of the mood of the characters as well as the relationships between them are suggested in La Tortue Rouge only visually.

De Wit gives the audience a beautiful and simple story. It does not focus on the difficulties of man devoid of any material means in the face of nature, but on the mystery of life, on the fact that we live. In a way, the film functions as a parable that reminds us of the little joys of life. The two main protagonists, like Adam and Eve, lead a quiet existence in a place where there are no distractions of civilization, and that is enough. They are happy with what they have. On the lost island in the middle of the ocean, "Robinson" and "the turtle" have each other and that’s it.

The film was directed by the Dutch director, Michael Dudok de Wit, being a premiere for him also, because until this film he had directed only short cartoons movies. At the 2016 edition of the Cannes Film Festival, La Tortue Rouge won the Special Jury Prize in the Un Certain Regard section.