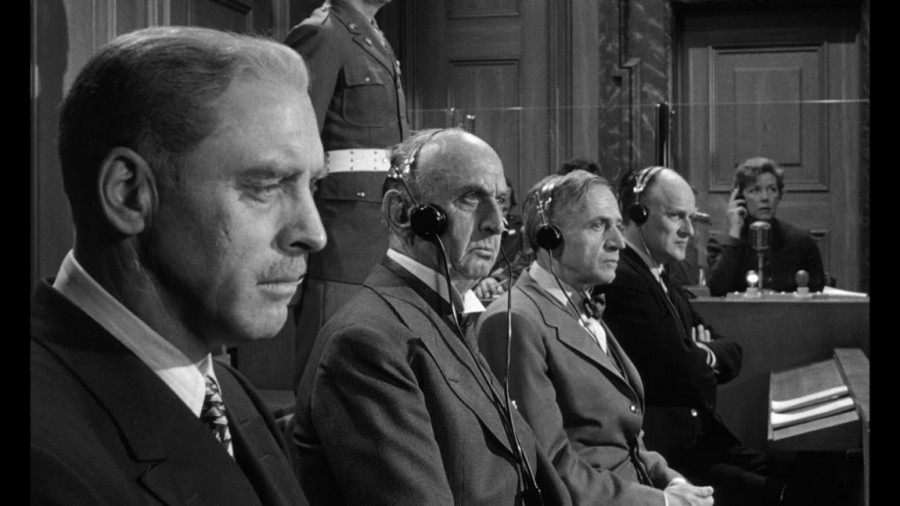 In 1961, director Stanley Kramer brought to the screen the drama Judgment at Nuremberg (the Nürnberg), of which action is set in 1948, the film is inspired by the trials that followed the Second World War. The defendants are being tried for collaboration and participation directly or indirectly to the crimes committed by the Nazi regime.

The four defendants (in the film) are former judges that through their sentences supported Hitler's regime. The screenplay written by Abby Mann directs our attention not on the major criminals or Nazi leaders, but on those who supported the regime in the second line, to the intellectuals who approved the injustices out patriotic awareness, out of ignorance or simply out of malice.

From the four judges accused, Dr. Ernst Janning stands out (played by Burt Lancaster), he was not only a distinguished judge, but also a brilliant intellectual, author of many treaties of law, widely appreciated internationally. Janning shows a silent hardened figure, withdrawn in "his mind palace", refusing to recognize the authority of the court judging him. On the other hand, Janning seems to be only one of the four accused who had a process of mind, trying to consider whether the acts for which he is in the stand were wrong or not.

On the other side is the judge Dan Haywood (Spencer Tracy), a man trying not to be influenced by the wave of emotion that heard by pleadings of both parties. Haywood is a balanced figure. He has no feeling of superiority, as seen at Janning, but rather a simple man who is not afraid to get together with the servants. Haywood Character shows us, through discourse and attitude that an immoral act, no matter how hard we would horrify us can be judged (evaluated) with calm, without indulging in passion and could be sentenced with lucidity, with no discontent not even for the most degenerate moral of criminals. Court presided over by the American judge should be and is, even when he seems unfair to the victims of Nazism, a factory of justice.

Unlike Haywood, Janning keeps away the other three judges to whom he shares the stand with, by clearly considering them inferior to him and treating them accordingly.

The cast is no short of talented players, quite the opposite. Along with Tracy and Lancaster, we see Richard Widmark (as Colonel Tad Lawson, the chief prosecutor in charge of the prosecution of the four judges who, as a witness to the horrors discovered in the former death camps, is pleading extremely passionate), Marlene Dietrich (as the character Mrs. Bertholt, the wife of a former German military executed for participation in crimes during the war, and a fervent campaigner for indulgent treating of the accused Germans), Montgomery Clift and Judy Garland (as witnesses), and even in Juneau William Shatner (later became famous for his role as captain James T. Kirk and as officer T.J. Hooker).

However, out of all this host of stars of the 1960s, stands out Maximilian Schell, who plays Hans Rolfe, the defense attorney. Schell received an Oscar for his performance and it was for his merits. Rolfe seems to live the intense drama process, transferring himself in the stand, among those tried. He strongly defends Janning not only because he was a role model, but also because he was the embodiment of the ideals of a nation, now convicted of the deeds committed in its midst.

One of the great qualities of the film Judgment at Nuremberg is that it manages to keep a balance along the 3:00 running. There are 186 minutes of intense discourse against the Nazi regime, but a battle of arguments and counterarguments from which, we can see step by step, that things cannot be judged easily or lightly. The screenwriter made sure that he gave the word - using Rolfe's voice – also to the group that we might be inclined to tag from the start as "evil". Defense attorney acknowledges that they have committed the unpardonable atrocities, but at the same time, points out that an entire nation can be judged for crimes committed only by some. And Rolfe also notes that during the war, atrocities were committed by both sides, giving the example of the atomic bombs launch on Hiroshima and Nagasaki.

The obvious intention in the film is not to utter hasty judgment but to listen carefully to all parties involved but that does not mean that the film leaves us in the dark. "You all seem to be human beings, and yet there were things that happened which were so void of humanity," says Judge Haywood at a time, as an assurance for us, the audience, of the effort to look at things also from the perspective of ordinary German people, for whom this in not a concession made to evil or immorality. Extermination camps will never find an excuse, not even in eternity, no matter how insignificant that may be. The difficulty lies in determining who and to what extent was responsible for the existence of these factories of death.

The writer tells us between the lines that evil is not connected only to ignorance and lack of education. The four judges brought on the stand were well trained intellectuals, people for which education and training as judges should have made them more sophisticated, sensitive to issues of morality and, above all, to prevent them to condemn innocent people on the grounds of ethnic or other forms of discrimination such as "Aryan vs. others." Yet history has shown (and the Kramer's film reminds us) that being educated is not the same as being moral.

The end or, better said, the assertion made by Haywood at the end of the film, made me think that the whole movie was built for it. I'm not going to quote it here, not to spoil the charm of watching the film (for those who have not seen it yet or those who wish to review and do not remember the end), but I think this is the proposition by which things are placed in proper perspective and we have much to learn from it. Of course, in matters of regarding our moral choices and decisions there will always be shades of which it is essential to keep them in mind. However, disregarding the shades, we find two groups known as "Good" and "Bad" and there is no compromise between the two. Beyond all shades, good remains white and evil, black.

I'm not sure Judgment of Nuremberg is an accurate description of how the process took place in reality, but certainly it is a challenge for those interested in the subjects with deep moral implications.

For the viewer of today, subject to so many social pressures and witness to countless debates and controversies with moral implications, Kramer's film leaves many questions to "chew" on, further on: Is there a valid reason to meet an order obviously immoral? Can cancel or destroy your conscience for political or patriotic reasons? Are there any reasons that we can place above our humanity?